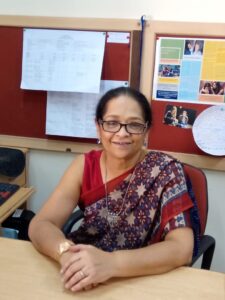 Shubhada Maitra is Professor and Dean, School of Social Work, Tata Institute of Social Sciences, Mumbai. She has an M.A. in Medical and Psychiatric Social Work, TISS, Mumbai and a Ph.D. in Social Work from Mumbai University. Her areas of interest include mental health, gender, sexuality and violence with a focus on women and children. Her PhD thesis focused on mental health consequences of childhood sexual abuse.

She is the Faculty-in-Charge of two field action projects of TISS: Muskaan, the child and adolescent guidance centre of TISS and Tarasha, that works towards recovery and reintegration of women living with mental illness.

She has experience of working on issues of sexual harassment at the workplace and has functioned as an external member on the Committee for Prevention of Sexual Harassment at the Workplace for several large corporate organisations based in Mumbai with business all over India.  She has contributed several articles to national and international journals and edited volumes. 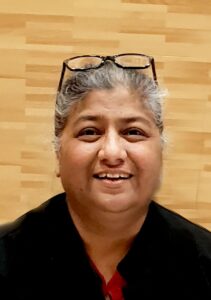 Ms. Meena Saraswathi Seshu is the General Secretary of the Sampada Grameen Mahila Sanstha [SANGRAM], a health and human rights NGO based in the rural districts of western Maharashtra and north Karnataka in India. In 1992, Meena was instrumental in guiding SANGRAM in the change of direction of its work. Under her stewardship, SANGRAM began to address social inequality and to promote justice among marginalized communities, discriminated against because of sexual preference, sex work, HIV status, gender, caste and religious minority. Meena has steered this women-centred organization to focus on building solidarity among diverse and marginalized communities by using a rights-centred approach to self-determination that organizes the voiceless to collectivize. SANGRAM is an umbrella organisation that has initiated communities to collectivise to fight for their rights. Veshya Anyay Mukti Parishad [ VAMP],[ Female sex workers], Muskan [ Male and Transgender women in sex work], Mitra [Children of sex workers], Vidrohi Mahila [ rural women’s collective] and Nazariya, [Muslim Women’s collective]. 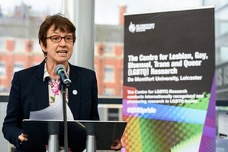 Professor Julie Fish has written widely on LGBT health and health inequalities; in particular, a jointly edited collection by Policy Press, Lesbian, gay, bisexual and trans health inequalities: International perspectives in Social Work. She has been an active member of a number of Department of Health advisory groups; in addition to working alongside community-based organisations as a scholar-activist. She has conducted several projects among LGB people with cancer funded by the Department of Health, the ESRC and Macmillan Cancer Support. Drawing on Antonovsky’s theory of salutogenesis, a recent paper argues that healthcare environments which facilitate disclosure can potentially enhance quality of life and recovery. She is currently developing a project, utilising co-production approaches, to address loneliness and social support for older women from marginalised communities (African Caribbean, South Asian, white working class and LBQ women). 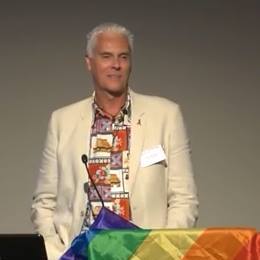 Professor Mark Henrickson (he/him) is Professor of Social Work at Massey University, Auckland, Aotearoa New Zealand where he has been since 2003.  He worked for many years in HIV-related health and mental health care before coming into the academic sector. He has published on HIV prevention, care delivery, and programme design and evaluation. Mark was the project leader on Lavender Islands: Portrait of the Whole Family (2004), the first national study of sexual minorities in Aotearoa New Zealand. He has published extensively on gender and sexually diverse populations, and led the AfricaNZ Health study on Black African new settlers in Aotearoa New Zealand (2012-13). His interest in HIV led him to a passion for international social work. He has provided technical advice on HIV in the Pacific for international NGOs, and has carried out in-country research and consultations in Tonga, Vanuatu, Fiji, Kiribati, Cook Islands, Indonesia and Sri Lanka. He was very active on the boards of the Asia Pacific Association for Social Work Education (2006-2017) and the International Association of Schools of Social Work (2012-2018), and served on the task forces that developed the joint Global Definition of Social Work (2014) and the joint Global Social Work Statement of Ethical Principles (2018). He was the recipient of the Eileen Younghusband Award in Seoul, ROK in 2016. His recent major publications include the edited book Getting to Zero: Global Social Work Responds to HIV (available free to download on the UNAIDS website) released in 2017, and a co-authored book Vulnerability and Marginality in Human Services (with Christa Fouché; Routledge, also in 2017). His current funded research explore the ethics of intimacy and sexuality in residential aged care.

Mark has masters’ degrees in theology and in social work, and earned his PhD from the University of California Los Angeles.  He is a registered social worker in New Zealand. 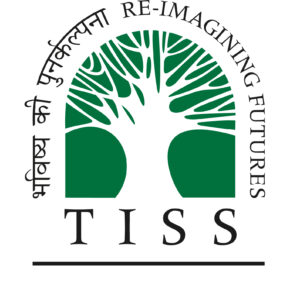